For many Thais in and out of Bangkok, Chicken Rice / Kao Man Gai (ข้าวมันไก่) is one of the essential dishes. In fact, probably for most of Asia. In many countries I visited, including China, Singapore, and Malaysia, the famous Chicken Rice is one of the things people will long for.

In Bangkok – which I consider the food capital of the world – there are literally thousands of Chicken Rice stalls to choose from. From street food vendors to shopping mall food halls – Kao Man Gai is everywhere. And not only in Bangkok: I’ve eaten some of the best Chicken Rice upcountry.

Pratunam is one of these neighborhoods in Bangkok where many of the iconic chicken rice restaurants have settled. There seems to be almost a heated debate about which one is better. Heck, even the new Michelin Guide for Thailand has given one of them a Michelin Star. Can you imagine – Michelin Stars for Chicken Rice?

I’ve tried almost all of them, including the Michelin-starred option, and while they are all good, none of them was as great as my favorite Kao Man Gai stall in the Buriram province. Plus, especially at Go-Ang (which received the Michelin recognition), lines can be quite long nowadays. While the options around Pratunam include also other foods, you may find better Kao Man Gai in many other places. Just look around!

Here’s my review of two of the most popular restaurants around Pratunam:

This place has become so popular with tourists and still conserves its original “small local restaurant” flavor that Michelin has awarded it a Michelin Star in its recent Bangkok issue. The result is an endless line of people wanting to try the “most famous” chicken rice in Bangkok. But is it really the best chicken rice? My review is mixed.

To begin with, I love simple Thai local restaurants. The type where there’s no air con, and you basically sit in an half-open shop with the “kitchen” out by the street on a cart. There’s thousands of them in Bangkok. And I don’t see why this necessarily is better than the others. 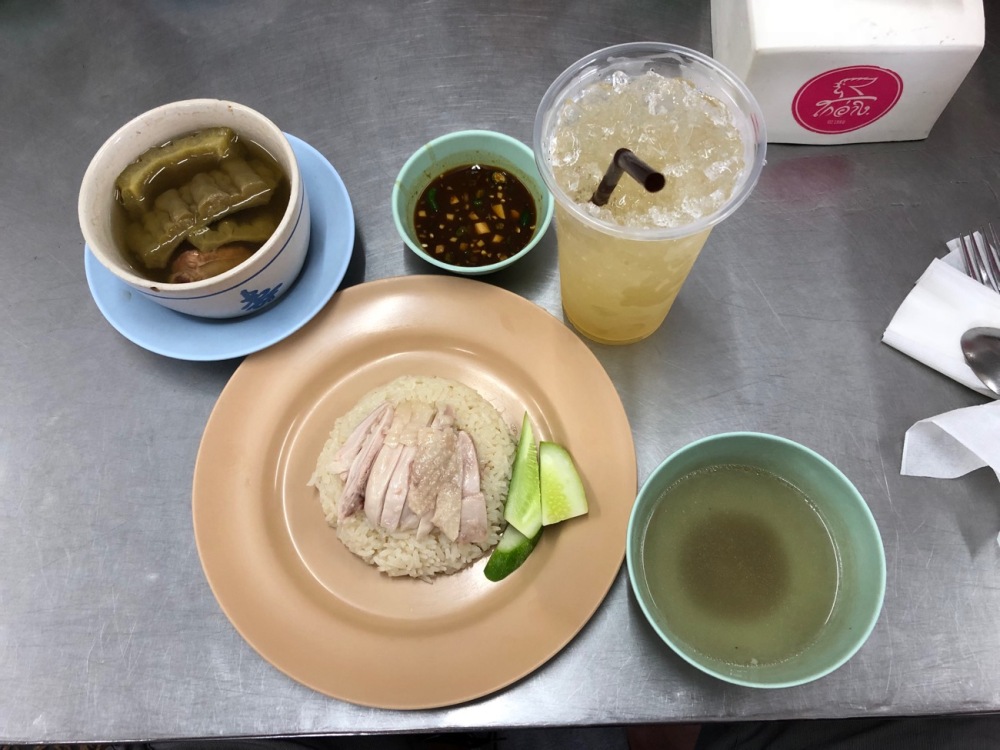 The chicken rice was very good. Of course. But the soup is for me just as essential as the chicken, and it tasted like they used MSG in it. Not nice. Certainly I have had better soup at Thai Chicken Rice stalls.

My verdict? Give it a try when lines are not that long.

This stall is not too far from the other one, and serves steamed as well as fried chicken on rice. The same setup, but less people flocking to the restaurant, which is good. Don’t bother ordering the fried chicken. The classic steamed chicken rice is the real deal here. But again – the soup didn’t excite me at all. The homemade sauce they serve with the chicken is amazing, though.

My opinion: An option just as good as Go-Ang. Usually less crowded.

Have a look at my Bangkok Eatlist for more streetfood. Which one is your favorite chicken rice stall in Bangkok?