You can’t really make a trip to the Japanese city of Kyoto without stumbling over those words: The Kyoto Protocol. It’s weird how an act of politicians in a small, historic place can change the world’s economic and ecologic life forever and shapes the image of a city. Well, at least what you expect of it. Because in reality, Kyoto is a lot different than I thought.

Being for the first time in Japan (yes, those countries still exist, where I have never been before), I was heading for nothing less but the cultural and historical center of Japan: Kyoto.

Getting there, as a westerner, is like diving into a whole new world. I thought I know Asia because I know China, Thailand, Singapore, the Philippines, and more. I thought I was prepared. But I wasn’t. I was lost in translation sooner than I thought. And it was fun to be able to still experience that in today’s connected and networked world. 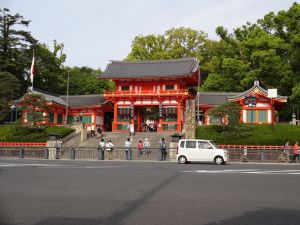 I have to say, without my iPad, I would probably have been really lost. It helped me to navigate in the subway, search for translations, look up hotel addresses and directions. But of course, the Japanese people are friendly and try to help – lamentably in many cases, it stays at the trying stage, because they don’t speak a word of English, and they convincingly tell you all the details in Japanese, hoping that you would understand! So cute!

So, how is Kyoto? Well, it’s a bit like combining a future sci-fi world with a historic place, say, 100 years ago. Where people use all kinds of electronic gadgets (almost scary), while at the same time women in kimonos and wooden sandals roam the streets. Everything seems so natural, so real that one has a difficult time estimating where in time we really ended up!

Kyoto is, of course, the center of the country’s cultural heritage. It is home to spectacular temples, like the golden temple, which is one of the most amazing things I’ve ever seen. Truly. And, Kyoto is home to the Geisha culture, which is an ancient Japanese tradition of entertaining, powerful men – but not exactly in the sense that we westerners would expect. And, of course, all of those clubs (they still exist!) are off-limits to the ga-jin (as they call us foreigners here in Japan). Interesting.

Surprisingly, this densely populated area boasts a lush natural environment with canyons, rivers, and significant portions of grassland around. Well, at some place they must have the space to raise all that amazing Kobe and Wagyu beef they serve here! It is delicious but costly. Worth a try, though. I still favor corn-fed US beef, it’s not as nicely marbled but still tasty and about one-fifth of the price!

Talking about food. Of course, that’s one thing Japan is famous for. And how justified. The food is something that strikes me here. I’ve never been in a country that devotes more attention, energy, and focus to the preparation of their meals. The chefs here are like gods, dressed in white, armed with the most expensive armors you can buy on earth. A knife here can cost you easily $250 or more. And a good chef features dozens of them.

We had all kinds of strange but surprisingly good dishes. Starting with Sushi and Sashimi, of course. Nothing like a nicely cut tuna belly. But we also had a different type of sashimi: Horse sashimi with raw egg yolk. Sounds yucky, but it was delicious. Like the best carpaccio you can get. Also, ramen noodle soups are big in Japan.

Fish, of course, is big here in Japan. So you better try some until the oceans are empty. Japan is heavily contributing to overfishing, as their kitchen relies heavily on those poor marine creatures, which are often eaten raw, if not still alive. It is a cruel culture. But they know exactly what they are doing, it seems.

Will I come back? For sure. But with more time. And I will bring along a Japanese friend – you definitely need a translator here to enjoy to the fullest.

One thought on “The Kyoto Protocol”